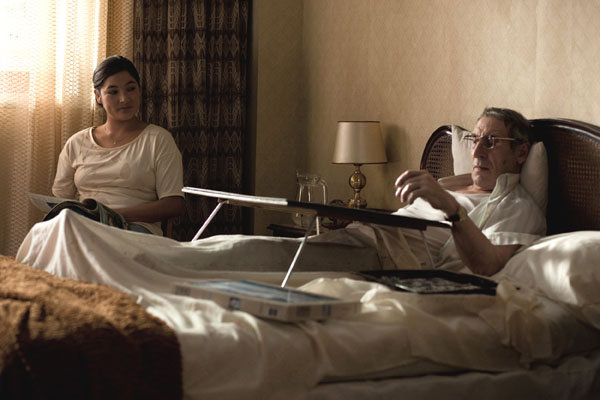 The tagline could read “Dead people are useful in many ways.” I wouldn’t describe this film as a black comedy, because there’s very little humor–Perhaps all of the jokes were too subtle for me to appreciate. The movie starts with a young immigrant woman (named Yolanda) leaving a dear John letter for her boyfriend. Unfortunately, and with the help of socialized medicine, she soon learns that she’s pregnant and decides not to leave her lover–She’s trapped.

To make more money to buy a new refrigerator, Yolanda (Sonia Almarcha) takes extra work caring for an elderly, sick gentleman named Amador. Amador’s daughter and son-in-law are busy building a house in the country, so they hire Yolanda to house-sit their father.

The running time of 112 minutes is far too long. Once the old man dies (and it happens rather early in the film), any charm or witty conversation dies with him. We spend much of the middle half of the film watching Yolanda silently trying to come to terms with a rotting corpse and her secret pregnancy.