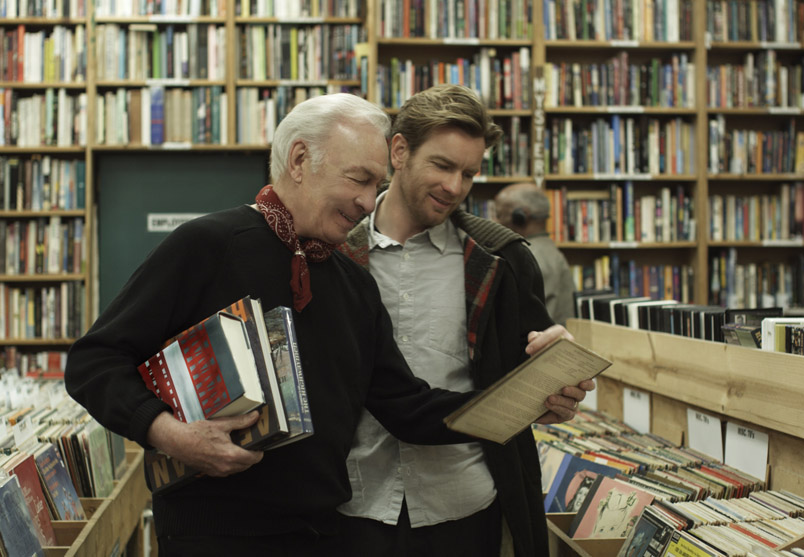 During the 2011 festival, we attended the Gala screening of this film and a special Tribute to Ewan McGregor afterward. If you’ve ever had reason to question who Mr. McGregor’s fan base really is, I submit that by standing in the front doorway at one of these events, you will leave with the marks of several hundred shoes imprinted on your forehead from a demographic of mostly 25-45 year old women.

Beginners is the weaving together of two stories, the first of which is about Hal (Christopher Plummer). After 45 years of marriage and the recent death of his wife, he is finally starting to come out of the closet. Other than being a little puzzled as to why a gay man would spend 45 years in a heterosexual relationship, the news doesn’t seem to phase his son Oliver much. We follow Hal in his excitement as he races to replace his entire wardrobe, experiments a little with clubbing, and makes the purchase of almost every book ever written on the subject of being gay (see photo above).

The second story, which takes place shortly after Hal’s death, is about the first month of a relationship between Oliver and Anna (Ewan McGregor and Mélanie Laurent). Distraught over the death of his father, Oliver dresses up as Sigmund Freud one night and goes to a Halloween party where he meets (and psychoanalyzes) a mute, silent-film actress named Anna.

For beginners, the talking dog schtick works. After Plummer’s death, McGregor inherits his father’s dog Cosmo and for the remainder of the film plays soft-spoken straight-man opposite a Jack Russel Terrier. In the [one-sided] conversations between Oliver and Cosmo, Ewan’s character shares with the audience his inner monologue.

When you’re a beginner, everything is new and exciting. The hard part comes once the beginning is over. For Hal, his uncloseted beginning needs no follow through because he simply gets old and dies. For Oliver and Anna, there will be no casualties (except perhaps their relationship) to provide a means of escape.