Syracuse is an Irish fisherman from the village of Castletownbere on the southwest coast of Ireland. His nickname is Circus, short for Circus Clown. His ex-wife is an alcoholic, and so was he for many years until their daughter Annie (Alison Barry) experienced kidney failure. When that happened, Circus decided to clean up his big top act. As the town’s priest puts it to Syracuse in one of their confessional duets, “Misery is easy. Happiness you have to work at.” His and his daughter’s lives seem bleak and both are in search of escape.

Then one day, as Syracuse (Colin Farrell) is trawling for fish, he nets what appears to be a drowned woman. After untangling and resuscitating her, she cannot remember (or will not say) who she is or where she comes from, only that he may call her Ondine. Ondines (Latin: Onda; meaning ‘a wave’) are elementals. In German mythology, Ondine was a very beautiful and immortal water nymph. It was said that the only way for Ondine to gain a soul and become mortal was to fall in love with a man a bear his child. 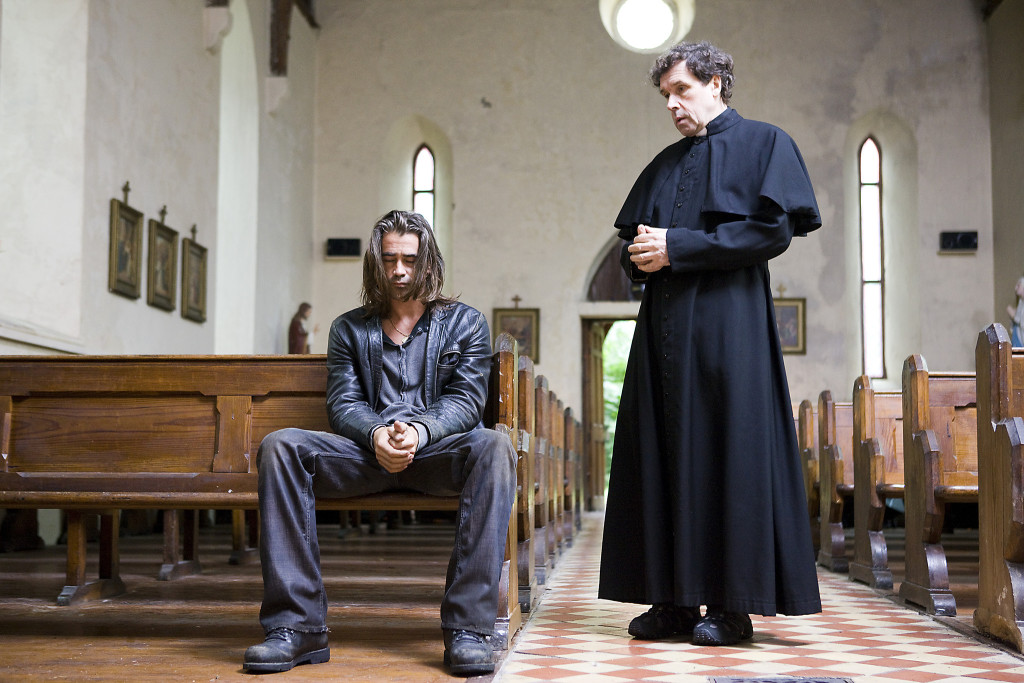 The big question in this film is whether Ondine (Alicja Bachleda) is really a Selkie (a creature from Irish and Scottish folklore, similar in some ways to a Mermaid). If she does turn out to be one of these mythical creatures, then the story is a fairytale. If not, all bets for happiness are off and we may be headed for a brutal reality in which there’s no happy ending. All three of the main characters in this film would like to loose themselves in a fairytale–Annie is dying, Syracuse is going to lose his daughter, and Ondine is running from a terrible past that is about to catch up with her. So, that’s just what each of them does for the most part–lie to themself and believe that they can change reality.

According to director Neil Jordan, the idea for his screenplay evolved from the first image of a fisherman finding Ondine’s body in his net, “those initial images suggested both a fairytale and an awful, harsh reality.” Something that I found interesting, is that all of the locations in the screenplay exist. Jordan scripted the film such that all scenes could be filmed within five kilometers his house. Castletownbere is a real, working fishing village far from the path of tourists and places like McCarthy’s bar are just part of the landscape.

Alicja Bachleda is somewhat of an unknown to me, I’ve not seen any of her other films (Trade, Summer Storm), or listened to any of her pop-music albums, but her performance here was excellent. After reading about how the water was freezing cold and that most of the time she was wearing just a knitted dress, I hope no one got hypothermia (at least she had a stunt double for the dangerous scenes).

Alison Barry, a ten-year-old girl from County Cork with no previous acting experience, was cast in the role of Annie. Her character’s know-it-all attitude, precocious use of obscure vocabulary, and overzealous belief in Ondine’s fairy powers annoyed me and shattered any dreamlike mood the film managed to achieve. Perhaps that was the director’s goal.

I liked Stephen Rea’s deadpan portrayal of the town priest.