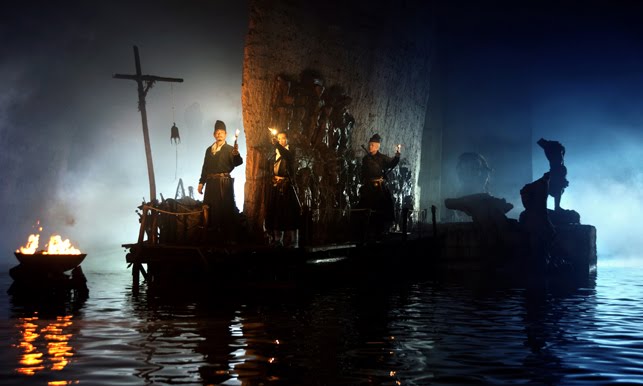 The time is 690 AD and the place is mainland China. Eight years earlier, Detective Dee led a revolt against the empress regent Wu Zetian who assumed power after the previous emperor’s untimely death. Some say the emperor died of liver disease, but others believe he was assassinated by the mysterious and magical Imperial Chaplain on orders from the regent. Detective Dee is still serving a life sentence in maximum security for his open opposition to the regent. Whatever the truth, Chinese politics seems complicated.

Flash forward to the eve of Wu Zetian’s coronation, but something is amiss. Two of her loyal subjects have spontaneously combusted after visiting the observation deck of a giant, hollow statute which is under construction (think Chinese Status of Liberty). The laborers who are building this 600-foot tall Buddha (right next to the palace, seriously?) are superstitious and afraid. Without much explanation, the regent orders her old foe (Dee) freed from prison and hands him his badge back. Literally, she hands him his badge back. Detective Dee is on the case of the combustible officials!

“Detective” is a curious word. I studied the imperial dynasties of ancient China just like everyone else in my high school, but I don’t recall there being a badge-toting police force in pre-Christ Asia. This film attempts to overlay western law enforcement practices onto a significant period in China’s past. Wu Zetian was a real person and the only woman emperor in Chinese history, ruling during the Second Zhou Dynasty from 690 to 705 A.D.. The pairing of modern forensics with an ancient backdrop is not one of the film’s problems, that part works. It reminds me of the third season of Moonlighting when Maddie and Bruce Willis led their fellow cast members in a perverted variation on The Taming of the Shrew. I’m sure there are more up-to-date examples of fantasy episodes for TV, but I haven’t watched much television since the 80’s…

Detective Dee doesn’t have the witty repartee of shows like CSI Las Vegas, but we do get a crime fighting team consisting of the ex-detective, an albino cop, and the “emperor’s bitch”.

It’s a little long at 122 minutes, so if you manage to see it on a big screen (and you should try to), I’d recommend a weekend matinee with lots of popcorn and one of those oil-barrel-sized caffeinated soft drinks.