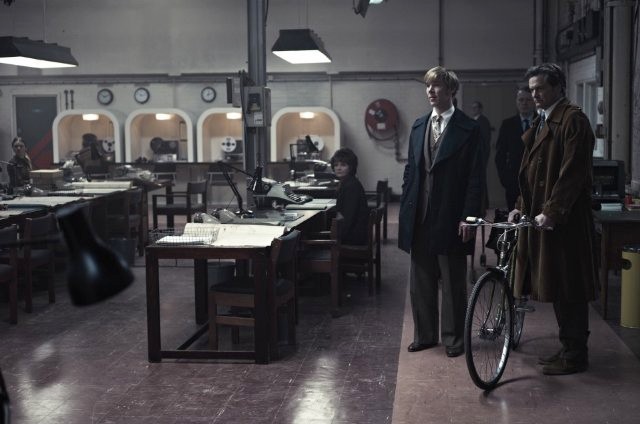 The year is 1973 and British intelligence has fallen from American favor. After the botched defection of a Czech Army general in Budapest and capture of the operation’s MI-6 agent, it’s becoming increasingly clear that there’s a leak at the highest levels of the Circus. The two men least likely to be double agents, Circus chief ‘Control’ (John Hurt) and George Smiley (Gary Oldman), are forced to resign over the debacle. Timing could not be worse though. Some of the officers who Control suspects as possible moles are about to begin feeding Langley secrets obtained from a communist informant known as “Witchcraft”, an intelligence source that neither Control nor Smiley believe is reliable, but who some at the Circus think will foster a better relationship with the CIA. You would think that a room full of spooks would recognize when something’s too good to be true.

Mr. Smiley isn’t quite ready for retirement though, so the devout civil servant picks up where his boss and old friend Control left off. The aged master spy sets off to uncover his agency’s mole, one of four men he’s served with for a very long time. Sometimes casting gives away the identity of a cloaked villain, but not in this case. My suspicions of the mole’s identity did prove correct, but only because said actor was afforded more on-screen time than the other suspects. What impresses me most about Gary Oldman (as well as other actors in this film) is his ability to act a scene with little or no dialogue, yet say volumes.

Clandestine terminology is part of what gives espionage stories their charm. ‘Circus’ is the in-house name of the Secret Intelligence Service (SIS) and refers to the location of its headquarters at Cambridge Circus, London. On the other hand, Ferrets, Housekeepers, Debs, Scalphunters, Coat Trailers, Shoemakers, Wranglers, Lamplighters and Cousins are all words you’ll need to look up on your own, if I tell you I’ll have to kill you.