The Wave (at SIFF)

A German film based on a novel by Todd Strasser. In turn, the novel is based on a real life high school classroom project that occurred in 1969 Palo Alto, California. From what I understand, the project spiraled out of control and unexpectedly spawned the seeds of fascism–good demonstration, but bummer of a result. The the teacher (Ben Ross) and two of his students attended the screening at SIFF to answer audience questions and talk about their experiences. I heard a rumor that this film does not yet have a U.S. distributor, but that would be a shame.

Phoebe in Wonderland (at IMDB)

An unidentified mental illness plagues a small town troop of child actors. Elle Fanning’s character Phoebe is definitely obsessive compulsive, that’s a fact everyone can agree on. But is she right for the part of Alice in the school play? Some of the characters in this film are a bit one-dimensional, but the script plays to a satisfying conclusion and tackles several social issues along the way.

The Secret of the Grain (at IMDB)

An aging, selfless shipyard worker decides to switch careers, though not entirely by choice. His dream is to create a floating restaurant. Maybe the dream is more for his friends and family than for himself. This is the story of couscous and fish, and a dinner party gone terribly wrong. What I found most interesting about this film was the enormous volume of dialog between its characters. All of the scenes are shot as complete, real-time sequences–encounters between individuals are filmed from beginning to end, not merely snapshots. Maybe that doesn’t make sense, but see the movie and you’ll understand.

The Unknown Woman (at IMDB)

This reminded me a little of Nikita, Luc Besson’s 1990 film. But the protagonist in Giuseppe Tornatore’s most recent movie isn’t an assassin…for the most part. This is the story of a Ukrainian woman who moves to Italy, trying to escape her sordid past and tracking down something she once lost. To do so, she will have to masquerade as someone she’s not and gain the trust of her new employers by whatever means necessary.

A light dark comedy about a sex addict and his dying, grifter mother who suffers from acute dementia. Set in a place that closely resembles colonial Williamsburg, there are goats, a couple of twists and turns, and few dead ends to the plot that seem superfluous. But, the film eventually weaves its way to a relatively sane conclusion. This movie is definitely off-beat.

Encounters at the End of the World (at IMDB)

Director Werner Herzog’s newest film is a documentary about life at the South Pole–Human life that is. Much of the movie is narrated by Werner as he films the residents of McMurdo Station and the surrounding landscape (both above and below the ice). These are the types of people you’d expect to find living in an off-world settlement, maybe on the moon. There are some penguins in his movie, but Herzog seems more concerned with uncovering the birds’ tendencies towards insanity rather than exploring their cute and cuddly behaviors. And we learn about icebergs, really big icebergs. 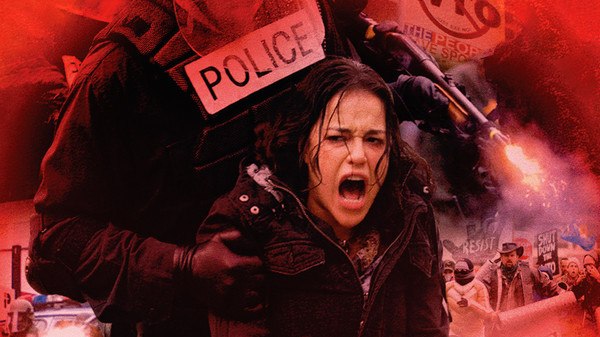 I watched this at opening night of the 2008 Seattle International Film Festival. Many of the actors (including Charlize Theron) attended the screening and participated in a question and answer session afterward. It played previously at the Toronto Film Festival last summer, and in some other venues. It’s currently scheduled for a general USA release in September of 2008.

If you lived or worked in downtown Seattle during that week of 1999, or were one of the WTO protesters, or just loathe the WTO in general, then this may be a movie for you. It was a good choice for opening night, because a Seattle audience is uniquely equipped to energize such a screening. And, it was a fun experience (the movie, not the riots). But, now I will review what I’ve been avoiding saying for the past couple of weeks.

The film is a mess. Good intentions aside, the story is chronologically told in an ominous and overly dramatic style that doesn’t befit the actual events. The filmmaker splices a generous portion of archival news footage into the movie, but in a way that made the film feel choppy and fractured. I know that parts of Battle in Seattle were shot in Vancouver BC, but the contrast of Seattle and Vancouver streets only made it feel that much more fractured. There are some competent acting talents cast in this film, but they’re grossly underutilized.

The reporter: reminded me of a magnetized pinball, bouncing from scene to scene, attracted to flashpoints in the conflict. The mayor: came across like a deer caught in someone’s headlights, over and over again, I kept expecting him to pull a bottle from his desk drawer and start drinking. The governor: was a good portrayal of an angry, mob boss.

This film felt much like a 2 hour, network television show, complete with at least three peripheral love lines. See it if you must, but if the WTO is what really interests you, avoid this movie and spend some time researching that organization and the 1999 Ministerial Conference on your own.

It would be nice to see a good documentary of the 1999 riots. Perhaps in a format of half archival footage and half interviews with city officials, demonstrators and residents. Perhaps sprinkled with an in-depth look into the architecture and impacts of the WTO. Perhaps a non-biased look at the events (if that’s even possible).

Ever read Moby Dick? Ever wonder why Ahab was so obsessed with a particular white whale? This 2007 film from France follows Ahab’s life growing up in the woodlands of northeastern America. We see him as an orphan, moving from place to place. There’s singing about drunken sailors as well as some short news reel footage of whaling from that period. Queequeg and Starbuck appear only towards the end of the film, but there’s no sign of Apollo or Admiral Adama.

Let The Right One In (at IMDB)

There are both advantages and disadvantages to having a 12 year old girlfriend who’s a vampire. But for the right boy, she might be the right girl. This is the most touching vampire movie I’ve ever seen, probably because it’s really not about vampirism. It’s about finding someone you can trust and who accepts you for who you are, and about the loneliness associated with living with a disability. Minus the horror, blood, guts and gore, this would be a good movie to take a 12 year old to see (but don’t, adults only). It’s Swedish with Swedish subtitles.

The director of this movie told us that Belgium doesn’t have the money required to make big budget films. However, he was preaching to the choir. Most of us who attend film festivals already know that a mountain of cash isn’t what makes a film great. This story is about an autistic, teenage boy who is bullied to an extreme by his classmates. Its intensity and sense of looming disaster makes it hard to watch. The director’s continual use of images from the boy’s online role playing game is effective and plays a central role in the story’s telling. The ending is not what I expected, but sometimes it takes a tragedy to get peoples’ attention. This is definitely something worth seeing.

Buddha Collapsed Out of Shame (at IMDB)

This was part of the New Directors Showcase at the festival this year. The film is acted almost entirely by young children, and directed by someone that’s barely an adult herself. Most people don’t understand the impacts of war, or how it touches the roots of a society. This film is a good educator. Also, it’s a pleasure to watch.