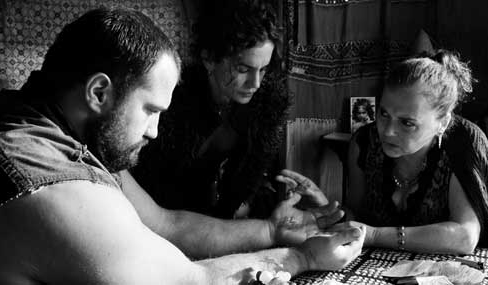 What’s black and white and red all over? With the exception of the ending, the film is shot in monochrome. There are nuns, a traveling carnival, a one-eyed villain complete with eye patch, lots of liquor, and oh yes there will be blood.

Bleeding from both face and hands, the movie’s protagonist is evicted from his apartment and loses his job. Whispers that he is a saint with supernatural healing powers spreads throughout the town. The next logical course of action is for him to take up work as a side-show freak. The cinematic imagery is great. Dialogue is sparse but effective (the film’s main character is definitely the strong, silent type).