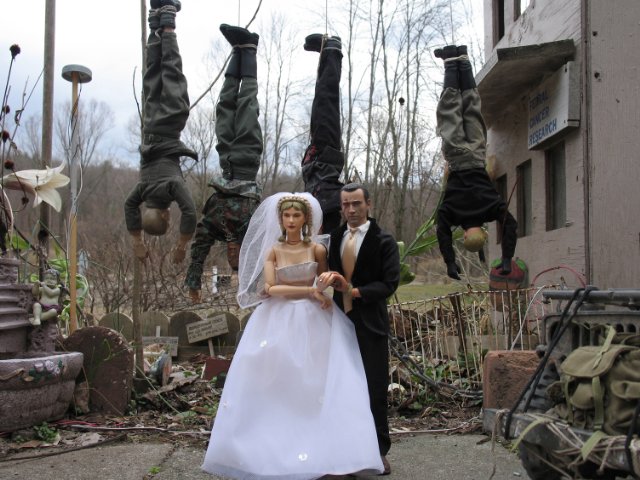 An artist (Mark Hogancamp) suffers brain damage and loss of all past memories. In the process of re-learning everything, he constructs a scale World War II town in his backyard. The town’s inhabitants are G.I. Joes and Barbies, many of who represent people in his life that he can’t remember. The town isn’t a static model though. Mark moves the dolls around to create stories and takes photos of each scene.

All of what he’s done is remarkable, but what I found most interesting was his ability to express very realistic and emotion filled scenes with lifeless objects. His original technique for photographing the village was also a bit awing. Without a functioning light meter, he used trial and error along with multiple rounds of film developing to get the right look. Someone recently asked if you need an expensive camera to take really go photos. No, you just need patience, practice, and a good eye.

There are some other points worth noting about Mark’s recovery from brain damage. Before the injury, his ability to draw was incredible. Afterward, his hands are too shaky to draw well so that’s why he took up modeling and photography. Before the injury, he was an alcoholic. For now, he has no urge to drink. What’s retained and lost by the loss of memory is fascinating. He liked cross dressing before the attack, and enjoys it now as well.

This is Jeff Malmberg‘s directorial debut, though he’s produced and edited a number of past films. The history of the town is compelling. Watching the movie was like walking through 3-D storyboard and having the writer explain the content and back-story of each frame.