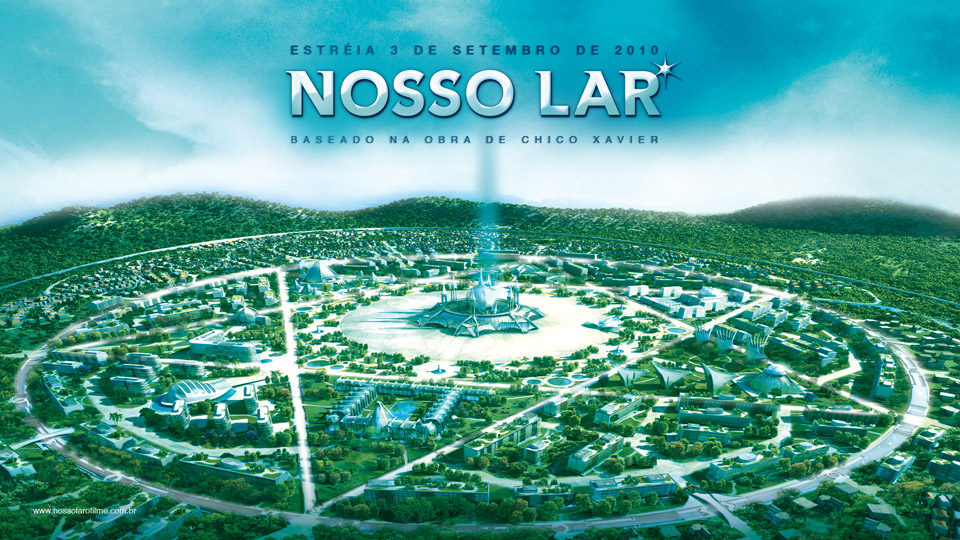 A middle-aged doctor dies, leaving behind his wife and children. He awakes to find himself in purgatory. Though he’s not a bad person, apparently certain forms of debauchery are synonymous with suicide. After serving penance by roaming this hellish landscape for some undefined amount of time, Dr. André Luiz is rescued by people wearing white sheets and granted entrance to a futuristic city referred to only as “Our Home”.

Our Home is more like a way station than it is Shangri-La. If you’ve ever seen the 1991 romantic comedy Defending Your Life starring Albert Brooks and Meryl Streep, the purpose and layout of the cities in both films is similar–each is a holding area where people’s souls either wait to be reincarnated or move on to a higher plane of existence.

This is Brazil’s biggest budget film in history, 20 million Brazillian reals (12.4 million US dollars). For frame of reference, that’s roughly how much it cost to make Terry Gilliam’s 1981 film Time Bandits. The reason for making a comparison is to point out that 20 million probably doesn’t buy you a lot in terms of special effects these days. Despite all of their good intentions and hard work, much of this movie looked 20 years behind what I suspect American audiences have come to expect from space and fantasy films.

There are some interesting twists to writer Wagner de Assis’s retelling of life after death though. (1) Housing seems scarce, so inhabitants of Our Home must “rent” rooms in shared residences. (2) Family bonds transcend corporeal existence, so you get to keep the same parents and children if you’re reincarnated (woo-hoo!). And by far the strangest matter-of-fact, (3) some of mankind’s greatest achievements in technology (e.g. computers, paddle boats, Viagra) were invented in Our Home and carried back to earth by reborn souls.