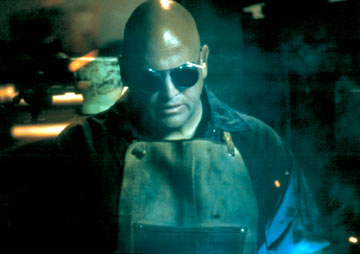 Trevor (played by Christian Bale) is a machinist. He also has insomnia and hasn’t slept for the past year. He is emaciated (probably because he hasn’t opened his refrigerator in that long either–inside is a secret, shhh). Which brings to mind the first question any insurance gecko with a cute, Cockney accent might ask of the shop supervisor: “Mate, why do you have some shattered bloke running the lathe?”

The shop’s dismemberment premiums are going up, you can feel that as soon as the little lizard starts scribbling in his notebook. Early in the film, Trevor’s co-worker Miller (played by veteran limb-contributor Michael Ironside) calls Trevor back to watch him sink his arms deep into the dirty, inner workings a scary piece of machinery. If you know anything about actor Michael Ironside, if you’ve seen any of his more celebrated roles, you know what’s coming next. Personally, I count at least 5 instances where old Ironside ends up with a missing appendage on screen (Total Recall, The Machinist, Starship Troopers, Highlander II, and Guy X). 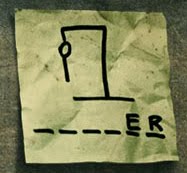 There’s a lot of heavy-handed foreshadowing and symbolism in this film. Do you like mysteries that challenge audiences to sort out what’s fact or fiction before the final unveiling of some twist ending, but like me are a dimwit when it comes to ferreting out the signposts along the way? If so, then this film is for you!

If, by the time Trevor takes his waitress’s little boy on the Route 666 ride at the amusement park, you haven’t figured out the entire plot, strap on your seat belt and fear not. Pay close attention as your RED sports car cruises past a half-familiar sequence of horror dioramas. I’m not saying you should turn off the TV and go for a walk after your drive, but you could.

Christian Bale can play crazy with the best of them. Sometimes he thinks he’s a vengeful bat, sometimes a POW pilot vacationing in pre-war Laos, sometimes an ex-boxer who’s taken one too many hits to the head. I can’t fault any of the acting performances in this film, nor can I complain about the cinematography or run-time or make-up.

However, from the screenplay’s first moments, it’s made abundantly clear to the viewer that circumstances are not as they appear. The screenplay (or direction, or both) patronizingly takes audiences by the hand and shows them the truth. I’d rather come to the realization that I’m lacking a full understanding of the story’s true nature on my own. I’d rather be that dimwit who can’t figure out what’s going on until the last 10 minutes of a film (or have someone explain it to me after the fact).

Perhaps I’m being overly critical, it’s worth seeing so decide for yourself.

What if NASA and the ESA launched an unmanned mission to Jupiter’s moon Europa with the intention of collecting some harmless samples for return to Earth. And what if, on its way home, the probe crashed into the Pacific Ocean and unleashed a plague of big, purple, tentacle-wielding sea monsters.

Six years have passed since that unfortunate accident, and this is Andrew Kaulder’s big break as a photo journalist. His trip to Mexico is turning out better than expected. The alien migration has come early this year, catching a lot of tourists off guard and south of the border, but for Andrew it’s the right place at the right time. Photos of live aliens and dead children bring the biggest bucks, though neither is easy to come by. And then the phone rings with a call from Andrew’s editor: “Andy, there’s been a change in plans. The boss’s daughter Samantha is in Mexico on vacation. She was injured in an alien attack last night. Listen, I need for you to go to the hospital and make sure she’s alright. Next, I need you to get her to the coast and onto the next boat home.”

Wait a second, let me get this straight. The oceans are filled monster amphibians and the only two options for travel past the infected zone of northern Mexico are by land or by sea? Surely I missed the explanation of why there aren’t any commercial aircraft ferrying people to and fro in this near-future world. Along with some gaping holes in the film’s plot, the story unfolds not unlike the campaign mode of your average video game (rescue the girl, battle aliens, follow the map to safety).

I wasn’t expecting a lot, but was surprised by the movie’s high production quality. I thought that their choices in CGI effects were tasteful and integrated well with the film’s live action–everything except for the angry, flailing, purple octopus atop an apartment building, trumpeting as it swats away fighter planes. I’m pretty sure that (and the movie’s name) was intended to poke fun at the whole monster movie genre. And even though writer-director Gareth Edwards cast Scoot McNairy and Whitney Able partly because of their real-life relationship as boyfriend and girlfriend, I’m not sure that decision paid off with any bonus in on-screen chemistry.

See this film, not for its overall vision, but for its scenic vistas:

Over their summer break, the reviewers at Ebert Presents have been running some 30 year old episodes of Gene and Roger discussing the genesis of particular movie genres. Which got me wondering about Monsters in terms of what originally kicked-off the romantic + sci-fi + unwanted + immigrant + extraterrestrial + joint + mexican + american + urban + warfare storyline. I have no idea. 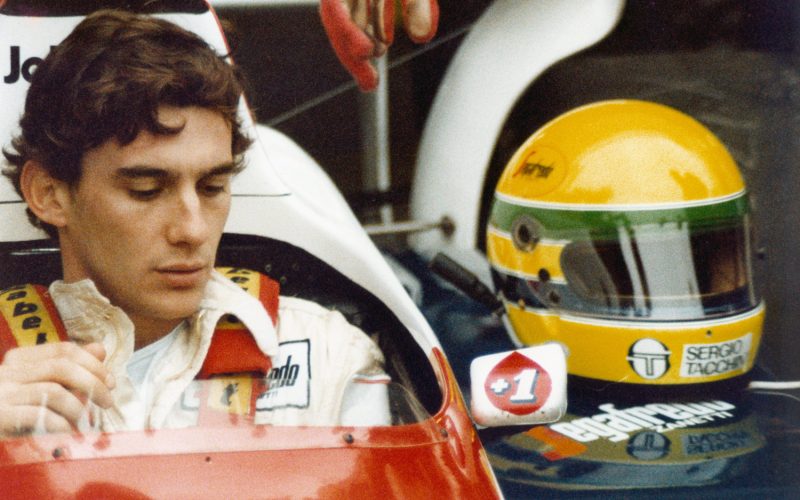 I’m not a big fan of professional sports. Aside from a few yearly outings to see baseball at our local ballpark, I don’t follow anything except for Formula 1 which I began watching about seven years ago. For those of you not familiar with the sport, it’s a mash-up of several disciplines including engineering, sponsorship, driving and politics. The interplay of these roles is what makes F1 fascinating.

Nowadays, electronics play a large part in car design and the viewing of any given race is akin to watching a manned space mission. Team engineers in a row of computer-filled trailers monitor the real-time telemetry of each car throughout race weekend. Twenty years ago, when Ayrton Senna was beginning his career, radio communications between the car and the pit had not yet achieved that level of sophistication.

During the San Marino Grand Prix of 1994, there were three spectacular crashes, the likes of which are uncommon. Two drivers were killed that weekend, one of them Senna. During lap 6, race leader Ayrton Senna lost control of his Williams FW16 on the Tamburello corner. His car left the track and slammed into the concrete retaining wall at over 130 mph. Having suffered severe neurological damage, Ayrton was airlifted to Bologna’s Maggiore trauma center where he was pronounced dead a few hours later. How the crash occurred has never been fully explained, but the preceding link walks through what the Williams team discovered after examining the car’s on-board computer. But this movie is not about Senna’s death, it’s about his career in F1.

This is one of the better edited documentaries I’ve seen in recent years. There are no actors. The entire film is pieced together from archival footage and narration is provided through interviews with Senna, his family, friends, other drivers, and the recordings of various F1 race commentators. It’s a biography of his life, both on and off the track, told from the cameraman’s perspective. We learn of his relationship with god, his passionate nationalism for his home country of Brazil, and the charitable foundation he started.

I wouldn’t recommend paying to see this movie in a theatre. The picture quality is poor, and there’s nothing special about the sound. You’re better off renting it when it releases to video stores or watching it online. If you know nothing about F1 racing, live in the United States and have access to the Speed Channel (or NBC Sports, or whoever has broadcast rights nowadays), I encourage you to watch at least one weekend of racing (practice, qualifying and the race itself span three days) before viewing the film. The film stands on its own, but the contrast of past and present will enhance your movie-going experience.

And keep your eye out for Bruno Senna, nephew of Ayrton. He’s driving for Renault during the 2011 season. 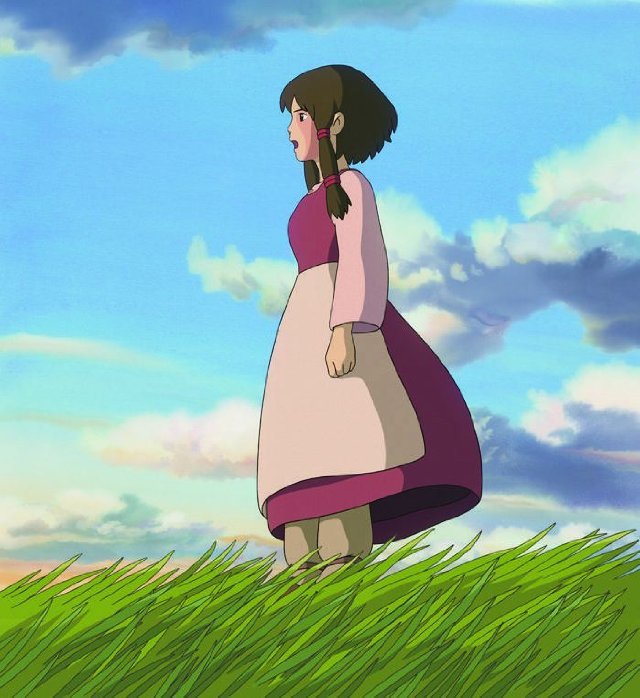 I’m a long time fan of Studio Ghibli and their hand-painted animation. Two of my all-time favorite films are Spirited Away and Kiki’s Delivery Service. This is my least favorite of the 10 (or so) movies of theirs I’ve seen to date. I have not read any of the Earthsea books, but that should not be a pre-requisite to enjoy any film.

For Goro Miyazaki (son of Hayao Miyazaki), this is the first film he’s written, storyboarded and directed. I can’t say there was anything new or compelling about the story or artwork. I’ve heard that Goro originally avoided anything to do with animation in his career, because he didn’t want to be compared to the accomplishments of his father. However, both the animation and characters were unmistakably identifiable as Hayao and Ghibli.

The character development was sparse and the story’s setup was missing. Basically, a plight is afflicting the lands. It’s feared that said plight is due to a weakening of the “balance” (of what, we’re not told). The prince kills the king, steals his sword, and runs off into the wastelands where he happens upon Archmage Sparrow Hawk (who the prince tags along with for the remainder of the film). There are old sorceresses with big round faces, flying dragons, and a very graphic limb dismemberment scene near the end of the movie. This might not be a good film for young children.

The trailer below is for the English release. I don’t like it as much as the Japanese version.