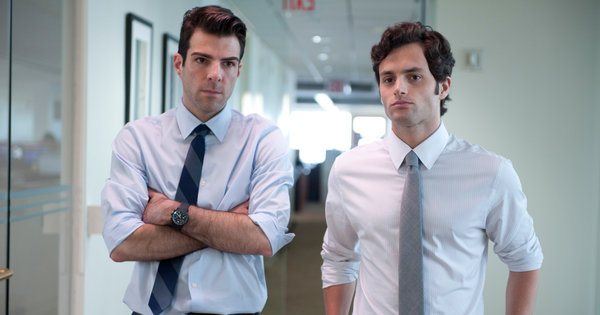 The summer of 2008 seems like a long time ago. The “new normal” of falling housing prices and 9% unemployment and a Republican congress hellbent on making the situation worse had not yet come to pass. As I recall, it was a time of hope and excitement about an electrifying young politician on his way to the White House. But in the span of a few days during that otherwise heady summer, the bottom fell out of the economy. Margin Call is an attempt to capture the kind of story that lies at the root of why the 99% are occupying Wall Street in cities around the country.

The basic plot is straightforward. A Wall Street firm goes through a brutal round of layoffs, and one of the victims (Stanley Tucci), hands over a program he’s been working on to a young analyst (Zachary Quinto) who has managed to survive the cuts. The analyst decides to take a look, finishes the work his former boss had started, and realizes that the firm is overleveraged to a disastrous degree. It’s late in the evening, but he alerts his boss, who in turn calls in his boss, who in turn calls in his boss … all the way up the chain to the company’s CEO (Jeremy Irons). Before work begins the following morning, they’ve established a plan to purge the problem from their books and save the firm at the expense of practically every other person in the country.

The characters struggle with the ethics of their decision and come to terms with the fallout of their plans, and while watching the movie, you’re drawn into the complexity of characters who could easily be black and white caricatures of the Wall Street set. And sure, they are: there’s the young associate obsessed with how much each of his betters at the firm makes in a year, and his boss with the $200K sports car who spends more a year on hookers than most American families make. But there is also a manager grieving for his dying dog and the earnest discussion about whether the plan they’ve hatched is the right thing to do.

This is what makes the movie really good. It’s not just that the characters have complexity, but that they have just enough humanity that you can empathize with them to the point where you have to keep reminding yourself that, human and frail as they are, in the final analysis these are not good people.

The opening scene is probably easy to dismiss, but it sets the tone for the whole of the story going forward. As each employee is laid off, he’s brought into a windowed conference room so that all of his colleagues can watch his humiliation at being fired, treated like a criminal, and given an offensively ungenerous severance package. The heartlessness with which the employees are treated by the firm is established as the driving force in each of the survivors, even as they come across a likeable and fully realized. Everyone realizes that what they are doing is terrible, but the money they are going to make from it eventually overcomes any moral pangs they might have. The speech Jeremy Irons gives Kevin Spacey about the necessity of their plan sounds reasonable, until you realize that it is essentially a more elegant version of Wall Street’s “greed is good” rant. The employees that have to execute on the margin call are made aware of the plan and its implications, but they’re complicity is bought with the promise of millions of dollars in bonuses for successfully toppling the economy.

The story is fast. Everything takes place within the span of 24 hours, and the intensity builds from the first moments to the very end. It’s gripping. But it’s also an excellent way of understanding why the occupiers are so mad, and why there needs to be an accounting of those who did this to the country.