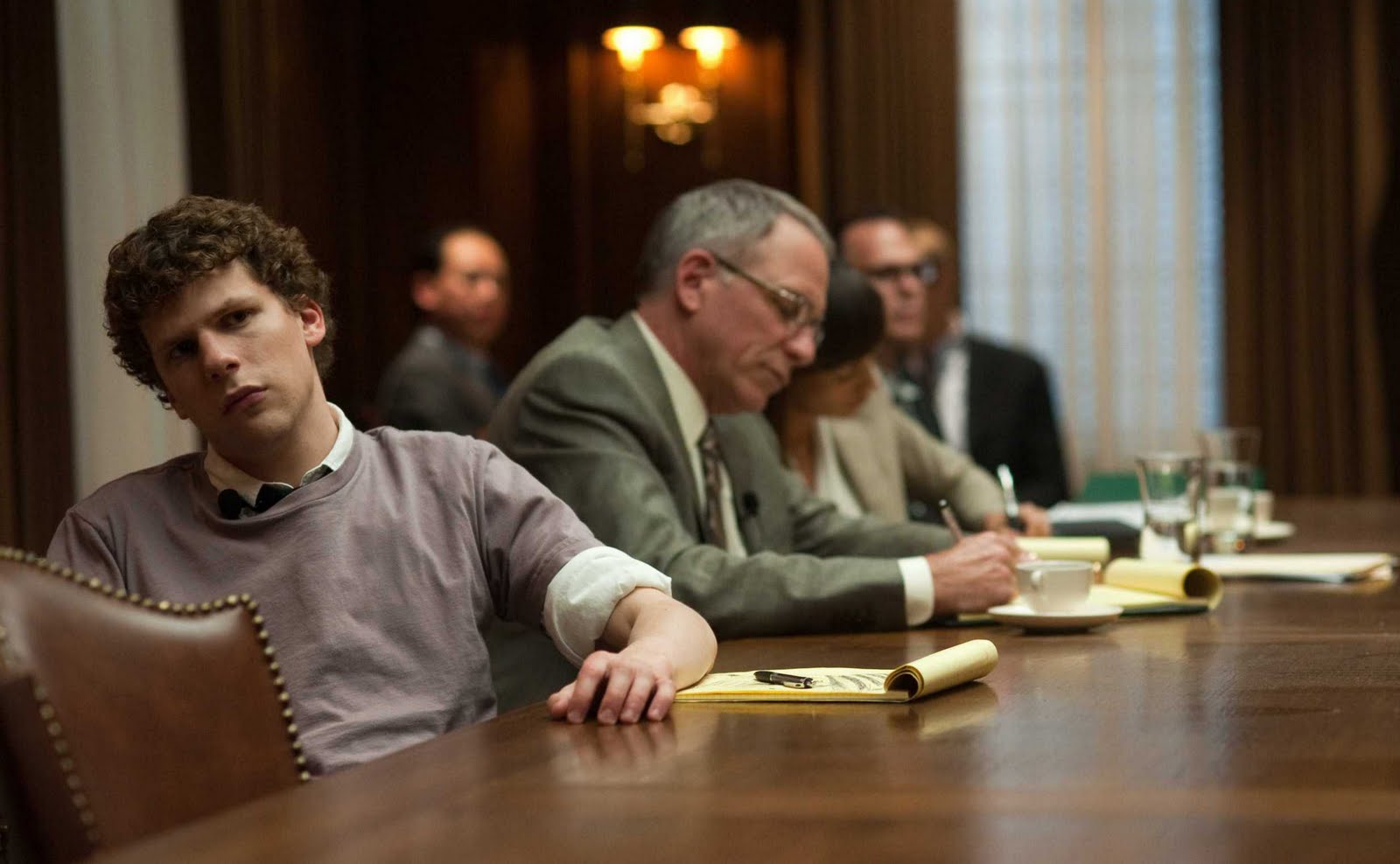 Mark Zuckerberg is a controversial figure. No one will deny that he’s extremely wealthy and has succeeded in creating the most popular social networking site to date. Beyond the indisputable lies a fog of inseparable fiction and fact though. I don’t know Mark, therefore I can’t speak to his personal virtue or true intentions, but The Social Network paints him as a shallow, uncaring, unlikable, socially inept individual. We the audience are the jury, and we’re asked to render a verdict based upon the arguments and first-hand accounts provided by the story’s characters.

The story opens with Mark’s juvenile, yet believable, response to a girlfriend dumping him over his condescending attitude towards her and her friends. In a knee-jerk reaction, Mark begins blogging hurtful gossip about his ex. At the same time (on the same night) he tosses back a few beers and throws together a web site that will allow users to comparatively rank the female students of Harvard. The Facemash site is so popular that its high traffic almost immediately crashes the Harvard network. Clearly, Mark’s character craves recognition, but the way in which he attracts attention demonstrates an objectifying anger towards women (and the IT department).

Not long after, and without much surprise, Mark finds himself before the school’s administrative board where he’s accused of “breaching security, violating copyrights and violating individual privacy by creating the website, www.facemash.com.” The same pattern of misbehaving-accusation-discipline continues for the remainder of the story.

We eventually discover the film to be a series of long flashbacks, chronicling the events from 2003 onward. In present day, Zuckerberg spends his time cooped up in a law office conference room listening to plaintiffs recount their grievances through past events. At times, it’s nearly impossible to tell what case we’re watching unfold. Changes in clothing and participant seating were the only ways I was able to tell that we’d moved forward or back in the timeline, and even then I wasn’t sure in which direction.

With the exception of a few peripheral characters, nobody in this film is likeable. Jesse Eisenberg (Zombieland) has a gift for narrating his characters’ thoughts and delivers a convincing portrayal of someone with Asperger’s syndrome (no, I’m not saying that Mark Zuckerberg suffers from that disease, everyone else on the Internet has speculated about that already).

One of the biggest annoyances in this movie for me is the name dropping of technology. I don’t enjoy the over-stated, over-dramatization of insider terminology and technical mumbo-jumbo unless (maybe) it’s tongue-in-cheek. The fact that you’re registering your domain name with Network Solutions, or talking us through how you’re using the wget command to download images of girls, or how you keep having to “break out” your favorite Perl script in order to crawl Harvard’s college web sites is going to be lost on the majority of movie goers. More writers and directors should take a lesson from films such as The Girl with the Dragon Tattoo (2009). Lisbeth Salander doesn’t cram what she’s working on down our throats, but quietly lets us watch over her shoulder in case we’re interested in what she’s hacking and how she’s going about it.

It’s a great movie with a lot of good acting. Just remember, before taking everything you see or hear at face value, stop and consider that people are more often judged based on public opinion rather than facts or concrete evidence (even in a court of law). As one of the female lawyers puts it to Mark near the end of the screenplay, “I’ve been licensed to practice law for all of 20 months and I could get a jury to believe you planted the story about Eduardo and the chicken.” Whether Eduardo was ever cruel to a chicken, we may never know, but now I’ve got you thinking about the possibility.

The Winklevoss twins are a digital illusion.