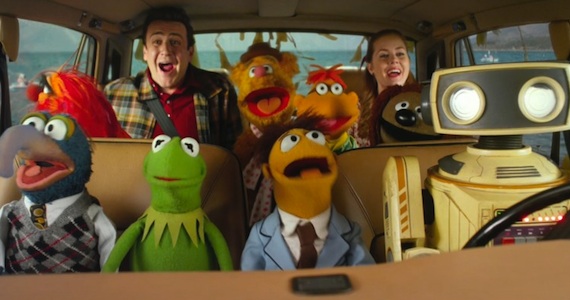 The Muppet Show first aired on the 19th of January 1976 and ran for 5 seasons, taping 120 episodes before being cancelled. It’s been off the air for 30 years now, but the franchise has spawned several feature length films. The latest installment, simply titled ‘The Muppets’, is a musical comedy romance starring Amy Adams, Jason Segel and Chris Cooper.

The plot of this film is both simple and dissociative. On one hand, it’s about the urgent reunion of Jim Henson’s beloved characters from the old Muppet Show, complete with opening dance number, special guest star, musical skits and back stage drama. On the other hand, it’s about the dysfunctional adult relationship between Mary, Gary and Gary’s “little” brother Walter. Mary and Gary have been dating for 10 years, but Gary still lives (and shares a pair of twin beds) with his brother Walter at a separate residence. On the superfluous third hand, it’s a tale of betrayal and corporate greed as capitalist “Tex” Richman (Chris Cooper) secretly conspires with the Muppet hecklers Statler and Waldorf to tear down the old Muppet theater and drill for oil…in the middle of Hollywood.

I was only mildly a fan of the original series. Probably like many children, my enthusiasm for Kermit and friends peaked as a pre-teen and plummeted with the rapid onset of middle school and discovery of girls. It wasn’t that the puppets or their eclectic list of guests had become infantile, it was the series’s repetitive use of stale gags and lack of timely material. Watching Miss Piggy clobber somebody one more time isn’t much more entertaining to me than listening to Sesame Street’s Count von Count recite the numbers one through ten, but it is nostalgic.

The new Muppet movie is packed with nostalgia, frivolous cameos, unexplainable screen writing, and a defeatist attitude. The overall tone gives us the impression that Kermit’s gone off his meds, evidenced by the frog’s hermit lifestyle and electric fence he’s erected around his home. Gary’s little brother Walter, obsessed with the Muppet Show since a child (and a puppet himself), has little problem persuading Kermit to mount “one last” fund-raising performance and save the theater. However there’s a catch: despite a story filled with superstar cameos, no one wants to guest host the show … so they kidnap Jack Black.

Just out of curiosity, not because I really care:

Bottom line is that the frog depressed me (more than usual). The bits and pieces of this film contained some entertaining scenes and musical numbers, but the script as a whole felt like that powder blue, polyester leisure suit my parents dressed me in as a child on Easter. Amy Adams is a beautiful and talented actress, and this movie has a PG rating. Nevertheless, if you’ve been dating Amy for the past 10 years and are still sharing a bedroom with your brother, there are some important questions you might want to ask yourself.