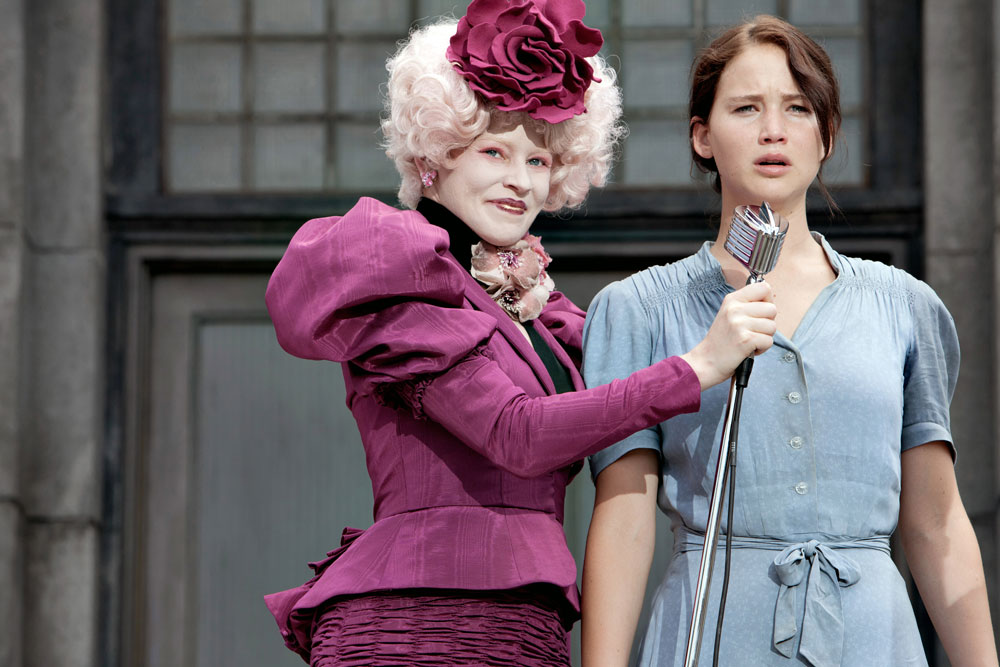 The Hunger Games is set in what remains of a post-apocalyptic North America. It’s a time and a place in a dystopian society that likely marks a turning point in its evolution. America’s descendants are governed by a totalitarian regime, many of whom are afflicted with a terrible disease that prevents both men and women alike from dressing (or applying makeup) in a sane fashion.

Katniss Everdeen (Jennifer Lawrence) is a coal miner’s daughter, literally. Well, not literally, because her father was killed in an industrial accident some years earlier, one that rendered her mother depressed and useless. Katniss now cares for her little sister and mum, hunting squirrels with bow and arrow to supplement the family’s diet.

Katniss lives in district 12, one of the 13 industrial zones that revolted against the government 75 years ago. As penance for their bloody rebellion, citizens from each district, between the ages of 12 and 18, are required to enter a yearly lottery. From that lottery, two lucky winners are chosen from each district, and all 24 of them fight to the death on TV. But that doesn’t add up, does it? If there are 13 districts, then why only 24 participants? What they won’t tell you in the movie is that unlucky district 13 (specializing in nuclear technology and weapons) was obliterated by the Capitol during the uprising. A little mystery about a film’s backstory can be intriguing, but The Hunger Games leaves volumes unexplained.

After a 200 mph, cross country train ride seated next to their new mentor and raging alcoholic (Woody Harrelson), Katniss and her teammate Peeta arrive in the Capitol city to crowds of cheering fans. As it turns out, the Hunger Games are more like a political campaign (or beauty pageant) than they are an Ultimate Fighting match. Making a good impression on the game’s patrons and finding sponsors to drop you care packages while you’re fighting in the arena is important. 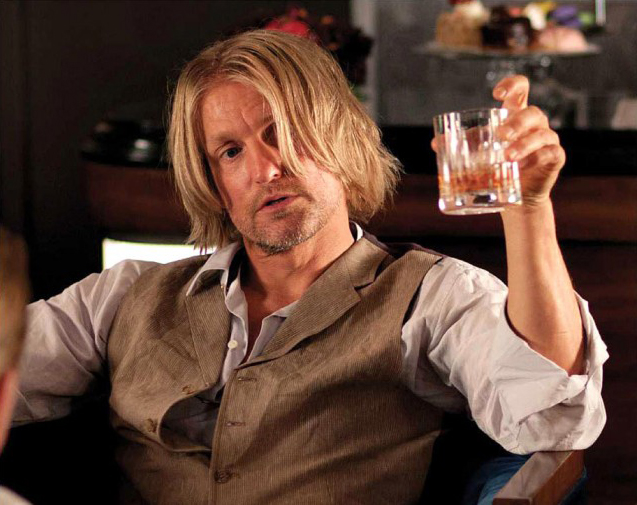 Leading up to the beginning of the games, competitors are treated more like celebrities than captives. Let’s see, you get your own private entourage consisting of clothing stylist, chaperone and 3-person prep team. While staying in the Capitol, you and your friends will be housed in a luxurious, penthouse apartment that comes complete with a well stocked bar not even Woody can drink his way through. However, the horse drawn Roman chariots and flaming dresses that they parade you around in aren’t going to make a difference against the districts who’ve been training their children to kill from an early age. Sorry, but you’re probably toast.

Suzanne Collin’s attempt to write a screen adaptation that’s “faithful in both narrative and theme” left me somewhat disappointed. It’s often the case that books don’t translate well to film, but there were problems with this production that could have been avoided. With a budget of 80 million dollars, I expected better set design and general appearance, but much of the look and feel of this movie is cheesy. The white jumpsuits and riot helmets worn by the peacekeeping forces reminded me of that made for television version of Brave New World back in the early 80’s. The training facility provided for contestants was nothing more than a big room full knives and targets. As for the characters, both adult rulers of Panem’s Capitol and their teenage “guests” are caricatures of good and evil, bullies or victims.

This may be one of those rare instances when I go back and read the book upon which a film is based. Even though the story is targeted at teenagers, many of the author’s ideas are relevant to today’s society. A fascist state resulting from some unnamed apocalyptic event (I could see that happening). Genetically engineered wasps whose venom causes hallucinations and death (why anyone would make wasps nastier than they already are is beyond me).

May the Schwartz be with you!
May the odds be ever in your favor!