(Holiday calendar and route of the Snowpiercer)

In the year 2014, climate scientists will finally solve the problem of global warming. Countries of the world will be convinced to seed their skies with large amounts of WD-40 in an attempt to halt rising temperatures. Unfortunately, something goes terribly wrong. In the process of lubricating the atmosphere, our world is plunged into a bitterly cold ice age (or maybe just a really bad snow storm).

But there’s still hope for the human race. A young boy with a fascination for model railroads will grow up and build a perpetual motion locomotive. The little engine will pull an obscenely long train of passenger cars on a closed circuit railway encircling the planet once every 365 days. The boy’s name is “Wilford” (played by Ed Harris). He’s an insane capitalist, and he’s here to help. The few thousand, lucky individuals who board Wilford’s train just before the world freezes over manage to survive inside of a closed ecological system for 18 years. No one gets on, no one gets off, everything is recycled and … is that Soylent Green I see on your plate? One of the many mysteries of this film is presence of steak on Ed Harris’s menu.

The Snowpiercer is a not a train of equality. It is a free market economy on wheels, where separation of class is conveniently represented by the linkages between cars. At the rear of the train, we have the impoverished workers. At the front of the train, rich capitalists live in luxury and debauchery. For comedic relief, we have Tilda Swinton (a warped activities director named Mason) who wanders the aisles preaching about how passengers should “know your place, keep your place”. To drive the point home, she sometimes wears a shoe on her head to illustrate how absurd it is for a caboose to be at the head of the train.

(Tanya, Mason, Andrew, Curtis, Grey, Yona — the dumb look on her face is because she’s a “train baby”, and Namgoong Minsoo)

Like any free market economy, there are periodic corrections that must take place. On the Snowpiercer, these corrections take the form of bloody rebellions where car loads of axe wielding, night vision wearing, hooded executioners cull the population and restore balance to the train’s delicate ecosystem. I’d like to tell you that there’s a point to life on the Snowpiercer, but there isn’t. These characters are acting out mankind’s last moments on Earth’s stage, clinging to a failed economic model once embraced by Western society. There are many points to writer-director Joon-ho Bong’s new screenplay however, most of them mocking what our world has become and how it will die.

Some have complained that the director’s cut of this film is too long (125 minutes). Nonsense, you just need a more comfortable seat, perhaps in 1st class. The Weinstein Company, US distributor of the movie, is reported to have screened a shortened version that met with colder acceptance from test audiences. Maybe part of what contributes to a feeling of cabin fever is the film’s four different sound stages, each built out as either a two-car, three-car or four-car set (click on the images below). Except for an occasional glance outside, audiences are trapped along with cast and crew inside of a narrow tin can for over 2 hours. 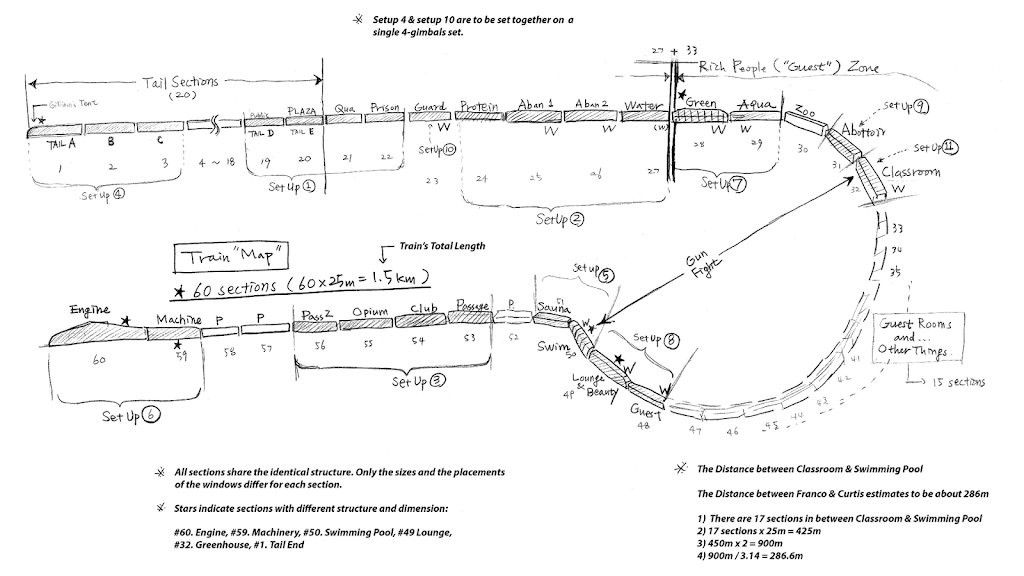 Coaches to help you relax: A walk-through aquarium, complete with sushi bar and chef. Fresh fish is served semi-annually. Arboretum with plants and things, a breath of fresh air after your bloody fight to the death five cars back.

Coaches to give you nightmares: The protein car, where all food for the tail section is manufactured. You really don’t want to know what’s in those purple, gelatinous meals. An elementary school run by actress Allison Pill. With a machine pistol in one hand, and a world map in the other, she’ll make sure you get the basics of a good education. You’ll learn things like “if you go outside you’ll freeze and die”. The kids are really excited about her class!

Snowpiercer’s screenplay is adapted from the 1982 graphic novel “Le Transperceneige” by Jacques Lob and Jean-Marc Rochette.