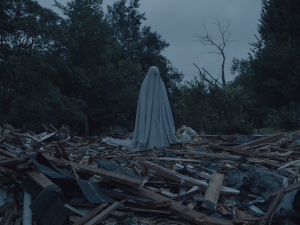 A singer-songwriter (Casey Affleck) dies and becomes a ghost. Instead of crossing over to wherever a ghost should go, he chooses to return home and haunt the house where he and his wife (Rooney Mara) once lived. He really liked that house even though it was a rental, and regularly fought with Rooney about whether they would someday move.

Actually, I don’t know whether the couple was married or not. I don’t even remember their names, and neither IMDB nor the film’s official web site feel the need to disclose that information at this time.

Frankly, it doesn’t matter though. This is a quiet film without much dialogue in which a person wearing a white bed sheet (it really is Casey under the sheet) stands around watching time pass and all traces of his existence slip away. Time passes first in seconds, then in days, then months, years, and eventually centuries — not always in the forward direction. There are skyscrapers and indians, covered wagons and arrow-riddled settlers. Because the ghost isn’t able (or possibly willing) to move from its physical location, changes in time are what provide us changes in scenery.

And then there’s the 5 minute continuous shot of Rooney Mara eating a pie. If you choose to watch this movie, and you should, try to hang in there until at least shortly after the pie scene without giving up and changing the channel.

This is not a horror film, though the director did consider that option. This is not a comedy, though there are a couple of really funny moments. I did not give away the entire plot in this synopsis, because there really isn’t much of a plot (the script was only about 30 pages). This is an experience and opportunity to reflect on the ideas presented, not so much a story.

Side note: The movie’s musical score and songs are very good. 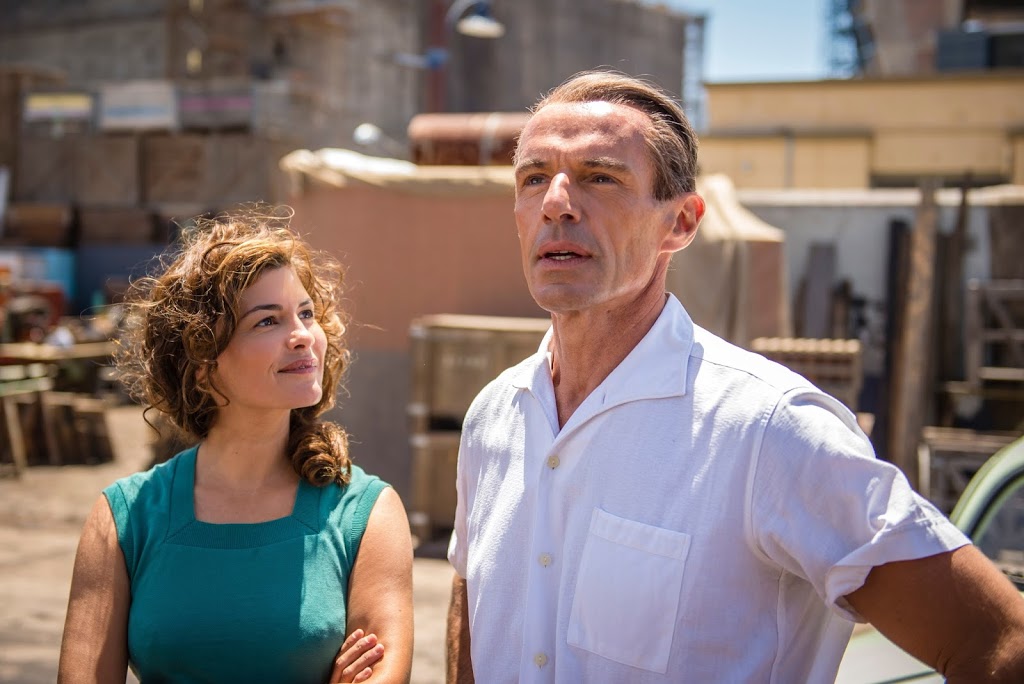 In June of 1979, Phillippe Cousteau died during a high speed taxi of his PBY sea plane, the Calypso II. His death is one of the opening scenes of this film. After that, things rewind to Phillippe’s childhood, and we follow his life until the inevitable funeral.

It’s likely that many of the people reading this blog don’t even know who Jacque Cousteau is. That’s one of the problems with history, how quickly people are forgotten. But this movie is full of history that you probably never knew!

Never knew, that is, unless you’ve seen The Life Aquatic with Steve Zissou. The Life Aquatic was a comedy written and directed by Wes Anderson, starring Bill Murray and the whole gang, and was released in 2004. The Odyssey is a “serious” version of that previously “funny” film. The Odyssey does not make fun of Jacque Cousteau’s catering to investors, or his obsession with churning out underwater films at a staggering rate, or his high volume of womanizing, or his forcing the Calypso’s crew to wear red, stocking hats all of the time.